The Crossroads Years, storyline database from the Crossroads Fan Club. Here we look at November and December 1964. 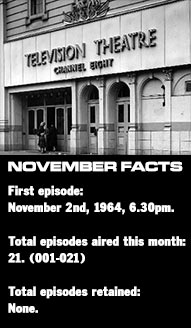 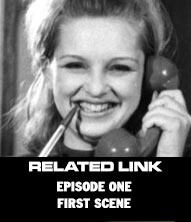 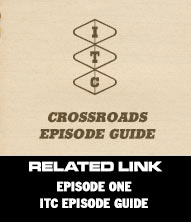 In the original synopsis, it is Meg Richardson who answers the telephone and speaks the first line. This is changed by the time the final script is signed off. Meg’s first line, mid-way through scene one, is ‘And what exactly is going on here?’ 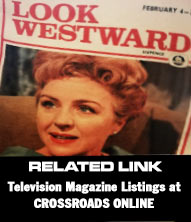 **Patrick Wade is a fake name being used by the character who is really called Philip Winter.

***Mr Thompson is William Avenell’s first role in Crossroads. He was listed in the credits as ‘Bill Avenell’. He is best known to Crossroads viewers as chef Gerald Lovejoy from the late 1960s into the mid-1970s.

****1st LEATHER COAT is Graham Weston’s first role in Crossroads. He was most famous for his late 1970s role as Garage Manager for Go-Col Colin Dutton.

Sue Nicholls makes her début as Marilyn Gates in edition 14.

In November episodes the local pub featured is ‘The Crown’. The road outside the motel we learn leads to Kings Oak Corner and Heathbury’s cinema is called The Regal.

∇ – Monica Lewis’ first role but returns as a different character, as does Stanley Illsley.

Scenes recorded outside feature in the opening of episode one. (Motel grounds as a car arrives), episode 16 (street scene and country lane), episode 17 (outside the motel). While no footage from the first 40 episodes survives a reel of film containing early stills from episode one through to January 1965 did exist in the Central News archive. There are no stop-shot cliffhanger sequences in the early episodes (The short scene that followed the closing titles).