A look through the viewing figures of the original series.

Crossroads was never networked during its original run. It was sold to each Independent Television region separately from 1964 to 1988, although plans had been put in place by ITV to network it in 1988 in a 7 pm slot before Central TV pulled the plug. 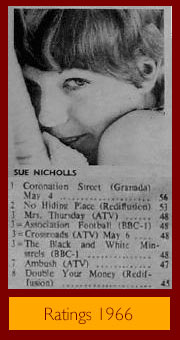 The region to region sale of the show to companies saw the programme airing at varying times across the UK and on different days. On the rare occasion Crossroads was networked in primetime, due to special events or sport, its ratings boosted up to 18 million onwards. This proved had the serial been networked it would have been regularly even more prominent in the IBA ratings of the seventies and eighties; as Jane Rossington noted in 1983;

“If we were shown at 7 pm networked every night of the week we’d always be top of the IBA ratings.”

Despite being shown from as early as 3.50 pm on Granada to 5.15 on HTV and 6.00 on Anglia or 6.30 on ATV the show still managed to, for a daytime soap, pull in often prime time ratings. It is, to date, Independent Television’s most successful daytime series in the history of the network. Most ITV companies picked up Crossroads in early 1965, as reported by the Birmingham Evening Mail at the time:

“Cheers! We’ve made it! The Crossroads cast toast – in coffee – to the network recognition of the six-week-old series. The first 50 editions of Crossroads have only been shown in a handful of regions, but the astonishing success of the first few episodes have lead to other regions booking the show.”

When the serial aired four-days-a-week some regions would show Crossroads Monday to Thursdays, others Tuesday to Friday and quite often varying combinations depending on the regional station’s choice of days and time. In the 1960s, it is noted that, despite not being networked, the soap averaged around eight million per episode. Pictured above left is the TV Top Eight for the Westward Television region in July 1966. At number three in their ratings was Crossroads. Pictured right: The stateside publication TVWorld notes Crossroads is in the top fifteen British shows of June 1978. 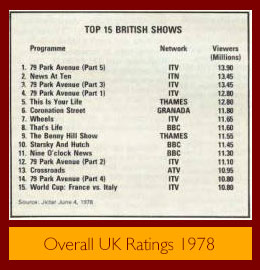 In 1971 – still not shown in every region – Crossroads was rating at the eleven million figure. From 1972 onwards, with all regions screening the show, the programme would feature in the top twenty pretty much for all of its run and was often in the top ten of the IBA ‘Independent Television’ national ratings.

Also within the ‘UK Ratings’ (the ITV and BBC programme viewing figures combined) Crossroads was a regular in the top twenty. The IBA was horrified that a ‘cheap filler soap’ was rating so highly, commenting it was “distressingly popular” – these people supposedly there to look after viewer interests – yet do entirely the opposite!

The viewing figures archive for the 50s, 60s and 70s was destroyed some years ago. So the most accurate figures are those held in the archive Broadcast magazines released at the time, however, we only have a handful of these which we will list separately to the figures compiled by Central Television in 1992 from their own archive IBA ratings guides.