Tony Hatch as part of the 40th celebrations in 2004 told the Crossroads Fan Club about his first major television theme tune which would be just one of many. 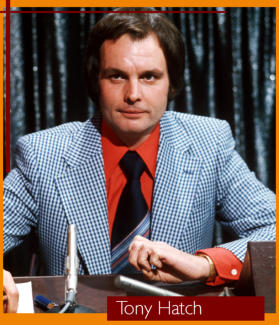 Hatch went on to devise the theme music for Emmerdale Farm, Neighbours, Sportsnight and New Faces to name only a few.

“It’s forty years since Crossroads hit our TV screens and I’m really sorry that forty years on it doesn’t have a place in our lives right now. I especially miss it because, as the composer of the theme music and thinking quite selfishly, it was a nice little earner for much of that time. 1964 was a particularly ‘golden’ year for me.

“I wrote, arranged and produced Petula Clark’s hit record ‘Downtown’, came second in the Eurovision Song Contest with ‘I love the little things’ sung by Matt Monro and wrote and recorded ‘Crossroads’ for ATV, my first major TV theme. I will never forget how it all happened. I had previously written one piece of music for ATV, a little song called ‘Over the ricketty bridge’ which was featured in a kids TV series called ‘Tingha and Tucker’. Tingha and Tucker were koalas. (Don’t say ‘bears’ – in Australia, they are ‘koalas’.)

“The series was devised by Reg Watson, an Australian TV producer working for ATV in Birmingham. He then devised a drama series about two families who lived and worked on opposite sides of a crossroads. One family ran a general store and the other the Crossroads Motel. He called me and asked if I would write a theme for the show. The budget for the music was low and it would have to be recorded in a TV studio in Birmingham – not the perfect acoustic conditions in comparison with the dedicated music recording studios I was used to.

“The original theme was actually two tunes. Each one represented one of the families and these tunes could be played separately or, because they shared the same chord sequence, together in counterpoint with each other. (Don’t ask me now which was which.) Reg’s idea was that if the first scene of an episode featured the motel then he would use their theme and vice versa.

“On the closing credits, both themes could be played together. (I think this was forgotten when others took over from Reg.) As the budget was small I decided to use a small rhythm section plus a harp and feature the first theme on a 12-string guitar with the second theme played on the oboe. Right at the beginning, I put the famous 9-note motif – the call-sign which gets the family in front of the TV set.

“Anyone who has a copy of ‘The Essential Tony Hatch’ (Castle Pulse PBXCD354 – available at HMV, Virgin Stores or the internet) can hear the original theme on the ‘TV Themes’ album arranged exactly like the original except I added some background strings for the commercial record version. Vic Flick played 12- string on both versions. Like many others, I loved the original series despite the way it ‘wobbled’ and always loved hearing my music. 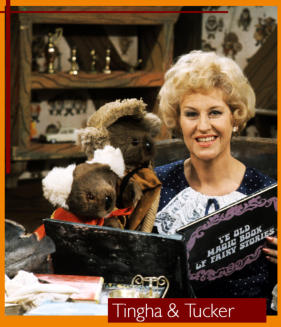 “In 1988 (or thereabouts) ATV decided on a complete revamp of the series and, amongst other major changes my theme was dropped and a new and quite forgettable tune (my opinion) was written by Johnny Patrick, Head of Music at ATV. I wasn’t happy – neither were the viewers. In 1988 ‘Crossroads’ departed from our screens altogether. (Questions were probably asked in parliament!)

“In 2000, I learned from Russ Abbott (during a game of golf which I’d rather forget) that ‘Crossroads’ would be coming back the following year. I made my own enquiries. The information was correct but I worried when I was told that no decision had been made about the theme music and a new tune might be commissioned. I submitted some new ideas, even re-arranged the original theme and waited patiently. Eventually, it was decided to use a re-arranged version of the original theme.

“I’m told that when Carlton presented the new ‘Crossroads’ to the media a huge cheer went up when the familiar opening 9-note motif of the original theme was played. I was happy with the arrangement even though it wasn’t mine and it boldly reflected the good old days of the series. I even visited the set in Nottingham as a guest of Carlton.

“Once more I had three soap themes running each week with ‘Neighbours’, ‘Emmerdale’ and ‘Crossroads’. Ratings for the new series disappointed the ‘powers that be’, however, and very soon there was another revamp of both storylines and cast. My theme was re-arranged yet again but it was so ‘wishy-washy’ and played so softly I hardly recognised it. Those bold and positive opening notes had disappeared.

“Sadly, no amount of re-vamping of the series was going to make any difference. Despite fairly good viewing figures, they weren’t good enough for the ITV Network and the show was finally axed – probably forever! Thankfully, (to paraphrase a great song) the show may have ended but the melody lingers on.” – Tony Hatch, 2004 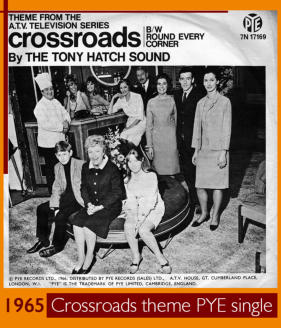 It is said that Tony Hatch created the Crossroads theme within 20 minutes of being asked by Reg Watson to devise the music for ATV’s new soap. It might have been one of the fasted theme tunes created, but its also according to many polls one of the best.

TV Cream voted it in at number 8 in their top 50 best-ever theme tunes. The theme and the soaps various incidental music inserts were recorded in one long session at ATV in the television studio. The popular theme music was released as a Pye single in 1965. This record was credited to the Tony Hatch Orchestra, but, curiously, an identical version was released two years later as the Tony Hatch Sound.

The theme can only be described as ‘thumping’ and very evocative of the 1960s, yet it proved so popular it remained in use until March 1985. In 1973 Tony Hatch made another recording of the theme, it was a complete reworking of the classic sound, the orchestral theme, was as far as we are aware never used in the programme. In the same year, Geoff Love and his orchestra made a waltz version and Ray Martin also tried his hand at giving the theme his own treatment.

Various other recordings appeared on vinyl during the 1970s. For Paul McCartney and Wings’ album Venus and Mars, the Crossroads theme was added as the final track, Noele Gordon was said to be “thrilled” at the Wings version, and it was used at the end of the programme on dramatic storylines. Fans, however, have mixed views on this version and a fan club poll revealed out of 3000 asked the 76% “hated” McCartney’s version.

Crossroads also had various incidental music created by Tony Hatch in 1964, such as comedy, suspense and the famous sad theme. Where the original audiotapes are we’re not sure, but Greg Taylor removed copies of the mood themes in 1998 from the former Central studios in Broad Street, Birmingham.

Although common in Australian soaps, very few UK dramas use incidental versions of the theme tune. Crossroads was one of the rare few that did, and usually to great emotive effect. The tape Greg saved also has copies of the regular opening and closing theme tune. The opening music is around 22 seconds long and as Tony said, there are two versions, which end without the harp. The closing music also doesn’t actually start with the famous ‘pings’, although the start of the closing theme was rarely heard on the programme as it was almost always faded in. 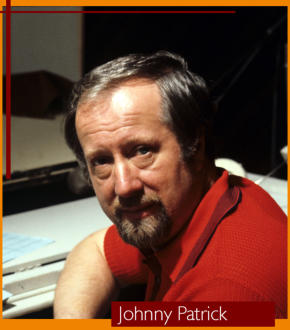 A much slower simple piano arrangement was made by Johnny Patrick in 1984 to compliment the new 45-second opening titles. This version debuted on the show on March 6th, 1985. It was a rather nice version, but more of an “incidental” theme rather than the main opening and closing music. In April 1987 this version was slightly rearranged, but in September of the same year things were to take a dramatic change; in the series and musically!

In 1987 it was decided to ditch the name Crossroads and call the series Kings Oak. With this change, a new theme was performed by Max Early and Raf Ravenscroft. This theme is generally disliked, the simple fact being that it is nowhere as good as the original Crossroads tune.

Tony Flynn was behind the new arrangement of the theme tune of 2001-2002, he kept the guitar element, but modernised the entire feel. A rather good version, and proved very popular with new Crossroads fans – and surprisingly – also with die-hard fans of the original series. For the 2003 run of Crossroads, the previous Tony Flynn version was ditched when the series took a new direction. 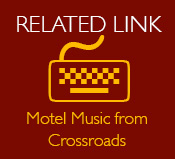 Patrick Dineen was asked to create yet another version of the original tune to compliment Crossroads’ umpteenth revamp and the third series; as Tony Hatch said this theme was practically unrecognisable and very weak. It did the score a great injustice and isn’t popular with very many fans of the soap.

For the majority of viewers, and indeed just music lovers in general, the original arrangement by Tony Hatch with its familiar guitar sound – played by former John Barry Seven leader Vic Flick – will always be the definitive Crossroads sound.