Here we look at the Crossroads story overall, we have more detailed features on each era of the serial in our ‘Decades’ section.

Crossroads was launched by one of Independent Television’s biggest programme producers and broadcasters, ATV Network. The company, which began transmitting in 1955, is today mainly remembered for its populist output however it also offered a wide range of high quality factual, drama and entertainment programming to the schedules.

ATV also wasn’t ashamed to produce cheaper, but popular, series too. So when it was mooted that they should make Britain’s first daily half-hour serial company boss Lew Grade agreed. Crossroads was the first to be tagged with the name ‘soap’ in the UK, with all the negative connotations that come with it.

The rest were called continuous drama serials and aired only two episodes a week. While the BBC and Granada said it couldn’t be done, ATV set out to put on the air a ‘soap’ in a format that had never been tried in the UK. It would be based on the daily soaps of America – a country which ATV was close to, having worked in co-operation with a number USA broadcasters.

The idea for Crossroads came about in 1959, however, its beginnings started back in 1954 when ATV sent two of their production managers to America to study television formats. Noele Gordon spent a year studying broadcasting at New York University, and also had a spell as an announcer on a local syndicate station, while Reg Watson spent time with the American Broadcasting Company making notes on the techniques and formats American broadcasters worked with. One format that he noted as being particularly popular with daytime audiences was the daily soap operas, which aired for an hour.

Just like many dramas in the UK of the time they aired live with no retakes. When Independent Television launched in 1955, both Noele and Reg were on the management of ATV in London, however, no opportunity arose to try out a ‘soap’ for nine years. Noele moved in front of the camera, having been a West End theatre star, to present several programmes including pioneering daily magazine series Lunch Box. Produced by Reg Watson over time the show began to produce a weekly outside broadcast.

In 1959 when an expected audience attendance of 3,000 turned into 27,000 at Nottingham Forest Football Ground Lew Grade wanted more. Reg told Lew that a daily outside broadcast of Lunch Box would be technically impossible with ATV Midlands’ limited resources, however, the fans were turning up to see Noele, and he had an idea that could utilise her popularity – as the matriarch of a potentially national soap opera.

Nothing more was said about the soap opera until 1964 when Birmingham Mail reporter Ivor Jay submitted a script detailing the plot of a drama series that was set in an urban Birmingham boarding house, which was to be run by two sisters. ATV was looking to expand their serial production; They already had hospital drama Emergency Ward 10 airing two episodes a week from ATV in London, but the Midlands was lacking its own regular drama. Lew Grade called in Reg Watson along with screenwriters Hazel Adair and Peter Ling who were at that time writing BBC twice-weekly office-based saga Compact.

The B&B idea didn’t appeal to Hazel and Peter, they suggested to Lew that they would happily work for ATV, but with their own idea. They were given two days to come up with something else. Taking Ivor’s basic idea, they transformed it into a near Birmingham story of a middle-class village with the focal point on one family in two key locations: a shop and a motel, one in the village centre, the other standing at a crossroad on the outskirts. It was called The Midland Road. Lew liked the idea, it particularly appealed as it would be entirely different from Coronation Street with a middle-class backdrop, but a range of characters from all levels of society. Lunch Box would be axed to make way for the series, and Noele Gordon would, as Reg had suggested, take on the leading role.

“The whole idea of the serial was to provide the Midlands viewers with a story set in the Midlands itself. There was also the chance of getting the serial taken up by other Independent Television companies, so this meant a wonderful opportunity to project the Midlands image to the rest of Britain. Coronation Street was covering Lancashire and the North, and I suppose you could say that the twice-weekly hospital series Emergency Ward Ten had done the same for the South.

“But Coronation Street centred on smoking chimneys, cloth caps and terrace houses. There was no real cross-section of everyday life and certainly, no one had yet tried to cater for Midlanders. The first problem was to decide just who the Midlanders really were, for our viewing area covered Swindon, Stoke and the Black Country. We also extended south to Oxford and covered the borders of Anglia, as well as part of Yorkshire and Lancashire. So although Crossroads was to be for Midlanders, it couldn’t just appeal to Birmingham viewers alone, it had to have a much broader basis.” – Noele Gordon.

Lew had remembered Reg’s ‘daily serial’ idea and commissioned ATV Midlands to produce five episodes a week across a trial six-week run. The Midland Road name was also deemed unsuitable, with Reg eventually coming up with Crossroads, which the motel would also be named. Due to the technical limitations of the time, the idea to name it after the fictional village in which it was set was not an option. After a few weeks of promotional trailers airing the first episode was finally scheduled for broadcast.

It was November 2nd 1964 when the ATV Midlands viewers got their first 25-minute instalment of Crossroads at 6.30 pm. The week before a press screening had been held at the West End Cinema in Birmingham City Centre, the initial reviews were all positive. The press also gathered at ATV Midlands’ HQ, Rutland House, for a photocall in the same week which introduced us to the eight key actors; Noele Gordon as Meg Richardson, Beryl Johnstone as Kitty Jarvis, Roger Tonge as Sandy Richardson, Jane Rossington as Jill Richardson, Brian Kent as Dick Jarvis, David Fennell as Brian Jarvis, Tony Morton as Carlos Raphael and Malcolm Young as Philip Winter.

Viewers learned that motels were relatively new in the United Kingdom, although they had been around for many years in the USA: that first phone call at the start of episode one saw Jill explaining to a potential guest what a motel was!

We meet recently widowed Meg Richardson, who we find out opened Crossroads in the grounds of her Georgian house, the home she had shared with Charles, her first husband and father to daughter Jill and son Sandy. Meg decided to build the motel out of the compensation money she was awarded due to a motorway being built through some of her land.

The then only 18 chalets cost just under £3 per night in 1964. The motel eventually boasted a swimming pool; restaurant and bar, all open to the general public as well as motel guests. It was set near the fictional village of Kings Oak in Warwickshire. The ATV Midland studios were, unlike Manchester’s Granada, not purpose-built. The Birmingham base, on the outskirts of Aston Cross, was an old cinema – complete with a leaking roof. The Alpha Television Centre was notoriously underfunded and in the early years understaffed.

ATV’s focus was London and their lavish Elstree studios. The Midlands was somewhat low on the priorities. The television regulator on several occasions complained to the management about the quality of the studios, with little improvements made. In the end, when the ITA (later IBA) broadcast licences came up for renewal the regulatory body made it a legal requirement that the Midlands region would have its own purpose-built production and broadcast facilities.

Due to lack of space, and by the very fact the series was only to run six weeks, early sets were designed by the entertainment crew, and took the form of less sturdy theatre flats. While it may have been fine on Lunch Box, critics soon noticed the motel was not as sturdy as it could be. Crossroads was extended to a 3-month run after only a week on-air thanks to the instant high ratings in the regions it aired.

After five months of transmissions, drama set experts from ATV Elstree were commissioned to sturdy up the motel and new main sets were introduced – these didn’t wobble any worse than those in Coronation Street or Emergency Ward 10. Despite this, the ‘wobbly reputation’ of those initial sets would haunt the show for all of its run.

Actors from the show disputed that even the early sets were as bad as some made out. Sue Nicholls, who played waitress Marilyn Gates, said she never saw any sets move in the years she was at the Alpha Studios.

“In fact, people who suggest Crossroads’ sets were the worst on television seem to talk as if ATV only ever made the one programme, the fact the same set designers worked on many other ATV programmes, along with the studio hands and scenery builders suggests that Crossroads sets were actually of a standard of all the ATV and ITC productions.” – Scott Curtis, Crossroads Fan Club spokesman.

In 1965 one critic said “Crossroads is the television success of the year” and reviews remained mixed. What wasn’t doubted was its popularity with viewers. Despite not all regions showing it – Tyne Tees tried it in early 1965 but dropped it after three months – and Granada refused to show it at all – the show was managing a respectable eight million viewers per episode, this increased to eleven million by the end of the decade.

In 1966 it was voted ITV programme of the year by TV Times readers, but the television regulator wasn’t so impressed, nor was ATV programme controller Bill Ward. The factory-style pace of the series at times left the script to be desired and new actors on occasion became lost in the fast turnaround of the schedule making performances stilted.

The 1960s press would have people believe this was a daily occurrence, but it wasn’t. There were some good episode and some bad episodes. There were some quickly rushed out scripts and some very well horned scripts.

“It also is untrue to say the programme was studio-based, certainly in the 1960s, the series had a lot of OB recordings on location, in fact as early as episode one there were some outdoor sequences. Production notes survive from 1965 showing scenes being recorded to videotape on location. Film footage survives from across the decade showing Crossroads in various places too.” – Crossroads Fan Club researcher Doug Lambert. 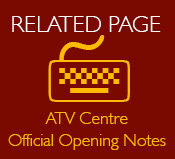 The bad press, written by people who didn’t often even watch Crossroads, was too much for Bill Ward; he wanted to axe the series outright – but was overruled by Lew Grade who noted the high esteem the show was held by viewers and the respectable ratings. Instead, the show was moved to 4.30 pm to try out some new serials, which ultimately if successful would have replaced Crossroads. None, however, were a hit with the audience and all disappeared very quickly.

After much protesting by fans, and indeed Noele Gordon, Crossroads was returned to teatime viewing. The regulator wasn’t so easy to please, and despite pleas, they ordered the show to air only four times a week. In 1969 the production moved into central Birmingham at the television regulator enforced new midland studios on Broad Street, ATV Centre.

It gave the show a chance to expand the sets once more and also bring the programme into colour production.