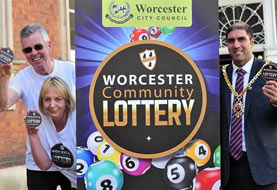 The caring charity was founded by ATV and the Crossroads team in 1974 following a storyline in the serial which saw Sandy Richardson (Roger Tonge) unable to walk after a car crash. The needs of his carer mother Meg (Noele Gordon) were later highlighted.

This lead to a fictional care scheme launching in Kings Oak, which became a reality following research into the needs of carers in the UK. Crossroads Care and Caring for Carers is now one of the biggest charities of its kind in the world, however, each regional outlet has to raise its own funding.

The Crossroads Caring for Carers Worcestershire branch is hoping to raise funds via a new local Lottery scheme, www.worcesterlottery.org

Anyone wishing to support Crossroads Caring for Carers can buy Lottery tickets, or find out more, at the website: https://www.worcesterlottery.org/support/crossroads-caring-for-carers