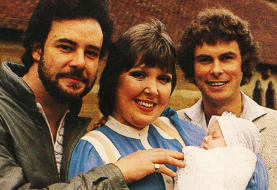 Simon, a senior broadcast cameraman at ATV and Central Television, became part of Crossroads’ story when in 1983 his real-life daughter Emily was to play soap opera’s first test-tube-created-baby following an IVF storyline.

Simon, Lynette, Emily and David were thrown into the spotlight due to the ground-breaking nature of the storyline as well as the family connections behind-the-scenes. Several newspapers ran stories and the plot featured on ITV News. While it was a brief public outing for Simon he had long been part of ATV, joining the company in 1973.

He had studied television production at West Surrey college and first worked professionally as a stills photographer for a research lab in the early seventies. Joining ATV at their Birmingham studios Simon worked on many of the programmes made at the centre and remained with the facilities through their change in 1982 into Central Television.

In recent years Simon had a spell with Ideal World television as a Director/Vision Mixer and a successful career as a freelance director, vision mixer and cameraman. Simon passed away unexpectedly on Friday 23rd October from stomach cancer. Emily notes that he ‘was not aware of how unwell he was and neither were we.’

With the ongoing global issues this year, it has also led to the family not being in quite the financial place they’d like to be – the television industry and performing arts hit hard in 2020 – so are fund-raising as Emily explains on Go Fund Me.