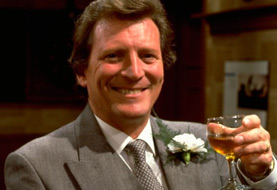 Coronation Street mourned the loss of one of the show’s true icons when actor Johnny Briggs passed away last month.

“It was when I was in Crossroads playing taxi firm boss Clifford Leyton that the Coronation Street producer, Bill Podmore, wanted a Londoner. He said to the Crossroads producer, Jack Barton, ‘That Johnny Briggs, is he alright?’ Jack said ‘Yeah, he knows his lines, he turns up to the set on time,’ so I was asked to do it and I said ‘Ok, I’ll do three months.’ Then the years have just crept up..” – Johnny Briggs, speaking to the TV Times in 2006

For 30 years – between 1976 to 2006 – actor Johnny was the original cockney on the cobbles, Mike Baldwin. Known for his love of whisky and women, factory boss Mike was the southern rogue who charmed his way through a colourful life in Weatherfield.

This special tribute programme celebrates the life of Johnny and his enduring Corrie character.

Street stars past and present recall working with a cast legend, and famous fans of the show take a fond look back at some of Mike’s biggest ever storylines; including his affair with Deirdre Barlow and bitter rivalry with her husband Ken, a love triangle that had the whole nation gripped.

“The whole Coronation Street family is deeply saddened by the death of Johnny Briggs. For years Johnny was right at the centre of the show, playing the part of Mike Baldwin and bringing to the role huge energy, dynamism, professionalism, and credibility. When Mike Baldwin was in a scene it was very hard to look at anyone else.

“And it was that charisma which made him irresistible to the women of Coronation Street, and to viewers. He truly was one of the most iconic characters the Street has ever known. We wish Johnny’s family all our condolences.” – John Whiston, MD of Continuing Drama, ITV speaking last month